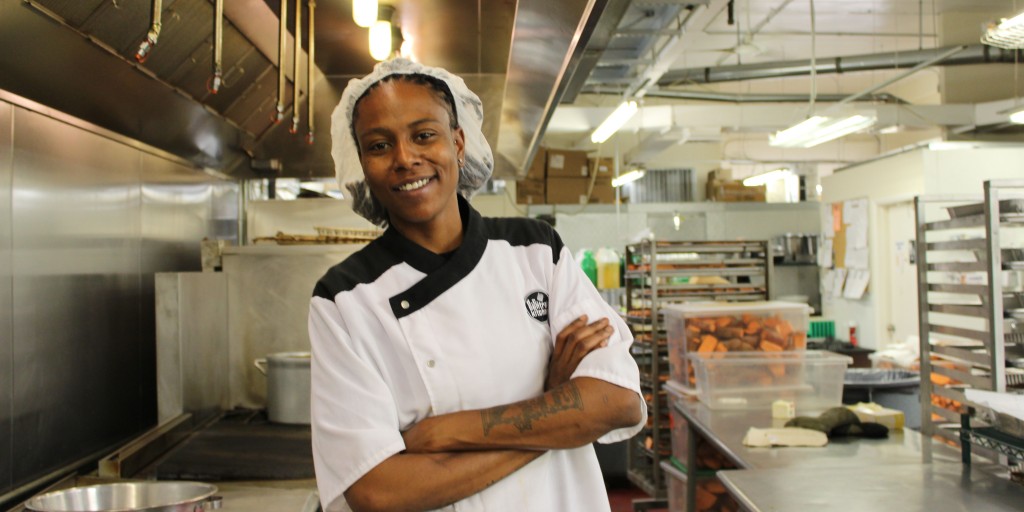 Irish playwright George Bernard Shaw was once quoted saying: “The people who get on in this world are the people who get up and look for the circumstances they want, and, if they can’t find them, make them.” That concept is embodied by one of our staff members and Culinary Job Training (CJT) graduates, Crystal Marshall.

Crystal is living proof that with enough drive and passion, a person can truly turn their life around. After returning home from prison with a felony on her record, Crystal knew she would have to build her life up from scratch. At age 30, she had no prior work experience and nothing to her name except a very supportive family, and more than a little ambition.

After returning home from prison, Crystal began volunteering at a local nonprofit called Friendship Place in order to gain community service hours as terms of her release. It was here that she learned about DC Central Kitchen’s Culinary Job Training program. Crystal wanted to live a life of purpose; she wanted to find a way to do something she enjoyed, while also earning a living wage, and she knew this would be a difficult task with a felony on her record. She had never cooked before, but wanted to find a way to gain marketable skills, allowing her to find more than just a job, but a career.  So, she set out to pursue her goals –  a woman on a mission.

“I didn’t want to just learn how to do something and get a job; I wanted to acquire a skill that I could use to get other jobs. So, I focused on learning, as opposed to just being there. I showed up every morning on time, excited about being there.”– Crystal Marshall

Upon graduating from CJT in January 2013, Crystal began working at Geppetto Catering in Riverdale, Maryland. Six months later, Crystal was hired by DCCK to work in our School Food program for which we serve up 4,300 locally-sourced, scratch-cooked meals to low-income D.C. schoolchildren every day. Only one year after joining the School Food team, Crystal found herself promoted to a supervisor position. She now works in DC Central Kitchen’s Nutrition Lab in Northeast, DC, overseeing her team of 12 staff as they all work together to meet each day’s quota of healthy meals for 10 schools in the District.

Not missing a beat since choosing to change her life’s path, Crystal not only has a job she loves, but has nearly completed a degree in computer science as well. Crystal climbed onto a moving train that’s not stopping anytime soon. She feels she has recreated herself. As this incredible young woman continues to beat the odds, it seems only the sky is the limit for her.